If you’re ready to advertise your business, you should definitely consider advertising on a billboard. These large scale ads are seen by 98% of the UK population every week and will bring more awareness to your company through the visual story telling of your brand.

The cost to have a billboard ad for your business varies, you need to identify the location, target audience and some other factors to establish the price. Lets learn more about billboards, including the types and costs below.

What is a billboard

A billboard is a form of advertising on a large space, that can be either print or digital. Billboards are typically placed in high-traffic areas, at busy junctions and on major roads with the goal of getting views from passers by.

A billboard gives consumers a quick glimpse and insight of what a company is offering. This is achieved mostly through images and very little text. To make the biggest impact, billboard designs should tell a story and be memorable so that the takeaway for viewers is that the business is worth looking into.

Traditional: Paper and paste billboards have been around for decades. They’re blue back posters that is affixed to the face of a billboard structure. This format costs much less than digital billboards and aren’t shared with other advertisers.

Digital: Digital billboards are dynamic ads where you can incorporate other elements like a moving images. Digital billboards are also very flexible as a business can be easily changed based on weather, current news etc. For example, a restaurant may want to advertise a breakfast menu during the morning and change to evening meals at 5pm. 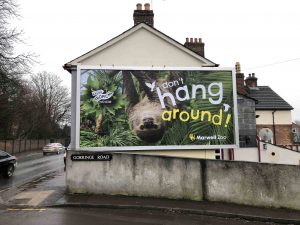 How much does it cost to have a billboard ad?

The cost of having a billboard ad for your business in the UK varies according to a few factors: The location, the size, visibility and display period.

The billboard’s location is a massive influence on the cost. This is because location is important as to who and how many people see your advert. A business can measure who sees the advert by looking at footfall, impressions and audience demographic.

In order to choose that perfect billboard location for your business you need to identify one that will gain millions of views from a relevant audience demographic.

The basic rule here is, the larger the billboard, the larger the cost. For example, A 96-sheet billboard which is 40ft x 10ft in size is likely to grab more attention and have greater impact than a 6 sheet.  The printing of the poster is also something to factor into the cost. The bigger the poster the more expensive it is to print.

Visibility is a key factor in the cost as its the length of time a consumer can see your advertising message. The viewing clarity of a site can also be influenced by the height and any obstructions like trees or street furniture blocking its view, as well as whether its illuminated at night.

Display Period refers to the length of time that your advertising message is displayed for.

The cost to have a billboard ad increases according to the length of time you would like to book it for. So, the longer the advert is displayed, the higher the cost to advertise.

For example a billboard in Southampton is around £450+vat for 2 weeks but is reduced to £500+vat per 4 weeks if booked for 6 months. 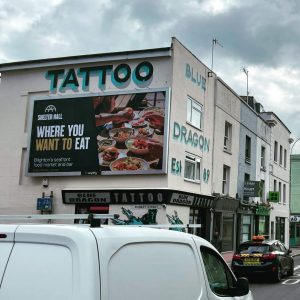 The additional costs to have a billboard ad

When looking to book a billboard you must consider the additional costs required for the printing and placement.

Amplify Outdoor’s prices includes these factors, but most outdoor advertising contractors charge extra for these. Printing a 96 sheet poster in the UK costs about £120+vat.

The cost of designing your advert must also be taken into consideration. It doesn’t matter how good the location of the billboard is if the ad doesn’t effectively portray your business. It’s worth hiring a designer with experience. This would cost around £50+vat per hour.

Our design service is normally included within you billboard advertising package when using our locations. Alternatively, if you have an in-house designer we will send you the specifications for the correct format and size. 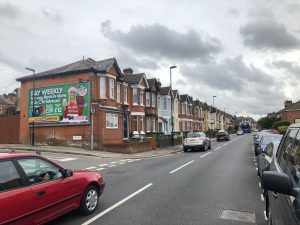 Finally, Contact us so we can reach Your Audience with billboards

To sum up, if you wish to effectively target specific group of people in a cost effective way, then billboard advertising is for you.need to know when and where to advertise.

If you have any further questions about how much a billboard ad will cost your business, please get in touch.  Lets talk and come up with an effective and affordable advertising campaign for your business.