Within the UK, Amplify Outdoor is considered to have a great advertising billboard cost and rates.

Most of our campaigns are repeat business as clients trust us and see the results we achieve. Furthermore, we offer an advertising billboard cost affordable to small and medium size businesses.

Below are the factors and information that affect the cost of billboard advertising. This is so you are fully informed when you’re looking to run a billboard campaign.

What affects the Advertising billboard cost? 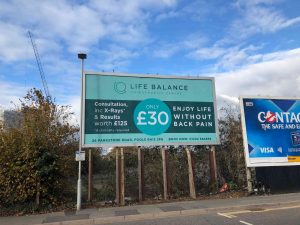 The size would affect the advertising billboard cost

Firstly, Let’s discuss the size of your billboard. This would have a direct impact on the cost that you will be invoiced for.

Known colloquially as a 48 Sheet billboard, This is one of the most cost effective traditional billboard available. They can be often found at the busy roadside and areas with a high traffic count and dwell time. There are even smaller options such as 6 sheets. These smaller billboards are often placed in shopping malls and bus stops.

Double the size of a 48 Sheet, 96 Sheet Billboards would of course would come at a slightly higher price. 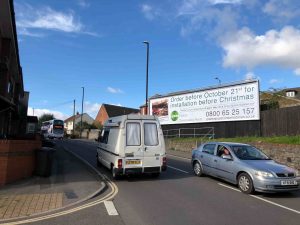 The length of the advertising campaign

The longer the advertising campaign the better discounts that can be offered. With a minimum rental time of 2 weeks, Amplify can offer fantastic discounts for businesses who commit to 4,8 and 12 or 52 weeks.

We’re unlike any other outdoor advertising provider. Our mission is to make this high impact form of advertising affordable to local businesses and SME’s.

If you have set a budget to advertise – let us know. Our past work has seen us accommodate small businesses regardless of their budget. We can help your business find the right, affordable campaign that meets their needs.

How long should I book a billboard for?

One of the greatest strengths of a billboard is it has the ability to build brand awareness and trust amongst consumers. A long advertising campaign builds legitimacy for your brand and targets daily routines. Multiple exposures to your advert over a period of time will make your audience familiar with your product and influence their long-term  choices.

In the outdoor advertising landscape we measure who sees your advert by looking at footfall, Traffic counts, ad impressions and audience demographic.

Footfall is the term for the amount of pedestrian or vehicle traffic that passes by a billboard. It is often used to see how successful a billboard advertising campaign might be as the more people are likely to see it.

For example, 2 million consumers pass by the Piccadilly Circus digital screen every week. That’s why it’s one of the most desired and expensive advertising locations in the UK.

A busy road may get higher footfall when it comes to vehicular traffic, but a busy traffic light junction with drivers in stationary traffic is likely to get far more views.

Choosing a great billboard location for your ad campaign involves finding a site that will have lots of views from a relevant audience demographic. 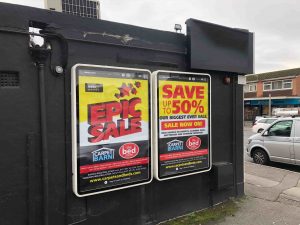 Traditionally, billboard advertising has been unavailable and too costly for local businesses.

This is due to the fact that national brands buy up all the available space. That’s why the the large outdoor advertising companies rent to those advertisers with big budgets to spend.

However, Amplify Outdoor’s mission is to make billboard advertising available and affordable to businesses of all sizes. Why should that one great billboard slot only be available to Pepsi?.

Local businesses can expect to pay around £100+vat per week for a prime billboard location with us. So, no, the advertising billboard cost is not expensive.

When renting a billboard, it’s important to consider the additional costs that accompany your campaign.

Our rates include poster printing and fixing, but some providers will charge you extra for this. Printing a 48 sheet billboard in the UK costs about £100-£150+vat.

Furthermore, the cost of designing your advert must be taken into account. If you don’t have an inhouse designer then its worth assigning one who has experience in designing billboard ads. This can cost around £50-£100 per hour..

I’ve seen a billboard location I want to use, how do I go about renting it?

If you already know which billboard site you want to rent then please get in touch with us today.